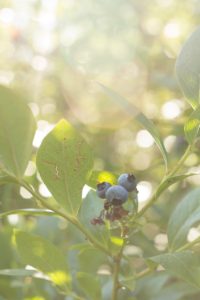 It’s a rare thing these days to know exactly where your food comes from, rarer still to be able to visit that place and meet the people who grow it. So when I heard that Smokin’ Willy’s makes its blueberry muffins with organic, locally grown berries, it sounded like a great opportunity to tell an uncommon story. As I soon found out, it was far more interesting than a simple farm-to-table tale.

The first bushes of the Higher Taste Blueberry Farm were planted on the banks of Lake Dolloff in 1954 but the story really begins in 2013 when Estee Byram and her family visited the farm to do some berry picking. Estee fell in love with the farm and ended up working there for three consecutive summers. She got to know the farm well and learned more about blueberries than most people would ever think to ask. For example, there are 16 different varieties of blueberries on the farm, each ripening at different times of the season, and some bushes can produce as much as 25 pounds of berries in a season. 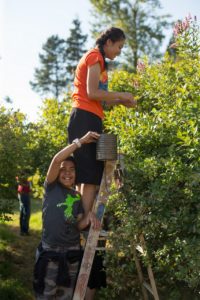 Estee returned earlier this summer after taking a year off to find the entire four acre farm overrun by seven-foot-tall grass and blackberry vines as thick as a roll of quarters. She called the owner of the farm, Mary King, to ask if everything was alright. She learned that Mary had since started a real estate business and regrettably hadn’t had time to prep the farm for opening. So Estee offered a solution. She would rent the farm from Mary, gather a crew to clear the fields, and run the farm herself for the 2017 season.

Here’s where it gets interesting: The crew of workers enlisted to whack the weeds and battle the blackberries would be volunteers from Estee’s church, ​Open Door Baptist of Kent​, and all the profits from the season would go toward an upcoming mission trip to Zambia. The volunteers range in age from 5 to 70 with the bulk of them being teenagers on summer break. In just the first week, 33 people worked a combined 310 hours reclaiming the bushes from the overgrowth and clearing aisles for the berry loving masses.

Estee’s family has played an important role in the process as well. Her mother, Jennifer, does most of the office work and purchasing, her sister Tiffany handles marketing and the farm’s online presence, and her other sister Brooke is in charge of customer service and volunteer training. The rest of her six siblings are active in the farm’s maintenance and day-to-day operation.

The project has thus far been a success. Neighbors and regular customers have expressed joy over seeing the farm brought back to life, the newly cleared bushes are heavy with delicious berries, and the kids from church couldn’t be happier about spending their summers outside working with their hands and accomplishing tangible goals.
There’s a lot of work left to be done though and tickets to Zambia aren’t cheap. The easiest way to get involved is to go pick yourself some delicious organic blueberries. At $2/lb, it’s a very easy way to help a good cause. If you’re looking to get even more involved, the farm could use some donations of time and materials. This includes hand tools for cutting back overgrowth, fuel and extra line for the weed eaters, a picnic table for the lakeside area, and a new roof for the shed.

Posted in Story of Food